FC Halifax Town caretaker manager Neil Young believes that his side showed great amounts of character as they came from behind to earn a deserved 1-1 draw at ten-man Wrexham. 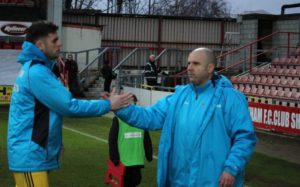 Young, in his first match in charge of the Shaymen, felt that the squad can take plenty of positives from the result as they steered clear of the relegation places in the Vanarama National League.

“I don’t think at any stage, they lacked any character,” Young told ShaymenTV.

“From our perspective, we set them up in a certain way, to try and negate Wrexham’s threats, and there’s a lot of them.”

“You’ve got a group of lads who want to do well and want to learn, it’s sometimes just that bit of confidence. 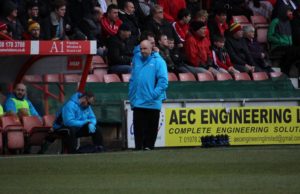 “They won at Aldershot, they beat Chester, so it’s in there, it’s just about making sure that they’ve got a structure to build from.”

“I think the week’s break helped because previously I was only in on the Thursday night,” Young continued.

“I had to introduce myself to the players first. To get in front of the players and believing in what you’re trying to do. We’re never going to solve that on an hour-and-half on a Tuesday or two hours on a Thursday.”

“We’ve got to work on the shape of the team and the structure of what we’re going to build on. To be fair to the lads, we’ve done a lot in a short space of time.”

To watch the full interview with Neil Young as well as interviews with Scott Garner and Michael Collins, head over to Shaymen TV now.

previous Wrexham: Great Point To Build On
next Wrexham: Show's The Quality We Have