Wrexham: Great Point To Build On

FC Halifax Town to Wales to face table toppers Wrexham as Neil Young took charge of his first game for The Shaymen.

The home side took the lead as Scott Boden headed home early on. He found himself with space inside the 6-yard box and directed his header expertly past Sam Johnson.

Halifax responded well though, creating chances while limiting the home side to openings. The right before half time Scott Garner buried the equaliser. A short corner worked well between Hibbs and Collins was whipped in and flicked on by Matty Brown and goal scorer Garner tapped home at the back post. 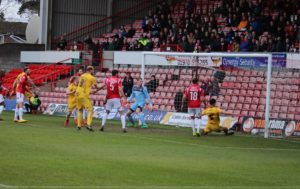 After the game Shaymen TV spoke to the goal scoring centre back.

Garner said how happy he was at how his side grew into the game “To start with I think they were on top of us a bit, but then we settled into the game and got them first one or two passes in and that settled us a bit. We done really well with the ball we kept it well in periods and created potentially the better chances”.

Garner didn’t have Halifax’s only chance of the game as he mentions. Striker Tom Denton had two chances to place the ball in the back of the net. Once in the first half as he headed over and one he did exceptionally well to get on the end of in the second which hit off his knee and flew over the bar.

Wrexham did play the last minutes of the game with ten men after winger Rutherford was sent off for a second yellow, a perfect opportunity for Town to go for the win. “We’ve gone at it perfectly today, we’ve grew into the game then in the last 15 (minutes) we’ve tried to win it…however that’s a great point to build on going into the next game”. 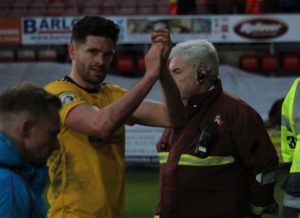 Today was Neil Young’s first game in temporary charge of the club after his debut was delayed due to a postponement of the Dagenham and Redbridge game, garner spoke about his new boss.

“He has come in and had a positive influence on us, he’s wanted us to play get them first couple of passes in. he’s told the full backs to stay narrow then expand when we’ve got the ball. It looked really good and has obviously payed off today”.

After talking about his new boss, Garner spoke about his partnership with centre back partner and club captain Matty Brown after brown flicked the ball towards Garner at the back post for his goal. 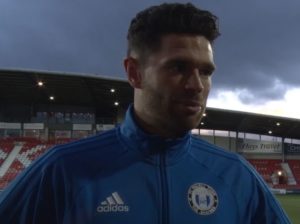 “We get on really well, but I don’t think he really wanted to link up with me then because I think his might have been going in and he’s saying I’ve poached his goal. But we get on brilliantly and look after each other on the pitch and do everything we can for each other so yeah it’s great.”

Finally, Garner was really impressed with the support from the travelling Shaymen, he said “It was brilliant, yeah there was loads here, a lot more than I thought there was going to be actually. I’m sure it’s quite a long trip and there were great numbers here again. It was great to come over to them at the end and celebrate the point with them.

Garner and co will be looking to impress in front of their side’s fans again on Saturday as Ebbsfleet visit the MBI Shay Stadium.