Wrexham: Everyone Contributed To The Excellent Display

FC Halifax Town manager was delighted at the team’s performance in the 4-0 win over Wrexham. He spoke to Shaymen TV after the game to give his thoughts.

“I’m really pleased, we scored some great goals,” Wild said. “The focus this week has been us working harder than we worked at Yeovil. I’ve looked back at the stats for how far we ran last week, and it was nowhere near good enough. We put it back on the players this week, they have probably been a little bit annoyed with me this week, but I got what I wanted today. Everybody contributed to the excellent display.” 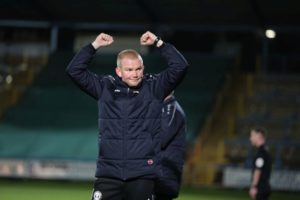 Wild was especially pleased with the start following Niall Maher’s goal. The deflected free-kick gave Town a 1-0 lead just nine minutes into the game. The Shaymen then doubled their lead just two minutes into the second-half through Jack Redshaw.

“We needed that, didn’t we,” said Wild. “We started well, and we had some opportunities, but to actually put one in the net takes the pressure off us a little bit. Also scoring so quickly after half time helped us because then they’re good times in games to score. To score at those time really puts the opposition on the back foot.”

This season, Town have struggled when playing against ten men. Wild was delighted the team were able to take the lead and continued to dominate the game following Leighton Mcintosh’s dismissal.

“First time we’ve played against ten men and won this season,” he said. “Over the moon to get that off our backs. Also, brilliant to get over our recent home form which hasn’t been great, I know. Really pleasing all-round to put a few things straight and get back to the Halifax Town that was here at the start of the season.”

Next Saturday Town face Notts County at The Shay. When visiting Meadow Lane County held on to a 1-0 win thanks to Kyle Wootton. Wild is hoping for a similar performance and for another great result.

“Big game again. I know what Neal [Ardley] will bring,” said Wild. “We have got to match fire with fire again. We are going to work as hard as we can this week like we did last week. Hopefully we can put in a similar display again. One mistake in the game cost us last time, there was nothing between the two sides. Let’s see what we can do next Saturday and see what we can bring to the table.”

FC Halifax Town  @FCHTOnline
⏰ 90 + 3' |Louis White picks up the ball from range before trying his luck at goal but it goes over the bar.🔵 0-1 🟡#Shaymen | ES
reply retweet favorite

FC Halifax Town  @FCHTOnline
⏰ 90' |There will be 4 minutes of added time to be played.🔵 0-1 🟡#Shaymen | ES
reply retweet favorite

FC Halifax Town  @FCHTOnline
⏰ 75' |Corner for Town.Gilmour takes and it falls to Arthur who hits a shot on the turn but it goes over the ba… https://t.co/fbg1xp5ynT
reply retweet favorite

FC Halifax Town  @FCHTOnline
⏰ 64' |Osawe with a looping effort towards the back post requires Owen Foster to tip the ball over for a Town cor… https://t.co/Yv82K3y4I0
reply retweet favorite

FC Halifax Town  @FCHTOnline
⏰ 60' |Town win a free-kick down the left-hand side by the corner flag.Cooke takes and it reaches Festus Arthur… https://t.co/XKMzPNvKH8
reply retweet favorite

FC Halifax Town  @FCHTOnline
⏰ 47' |Good chance for Town at the start of the second half as the ball is played to Jack Senior who hits a shot… https://t.co/ALntXtWYyh
reply retweet favorite