It was a disappointing afternoon in the end at the MBI Shay Stadium with the home side falling to defeat to National League North side Stockport County, Jamie Fullarton was preparing for his first pre-season in charge of Halifax Town but may find some areas on which he needs to improve on after today’s performance. 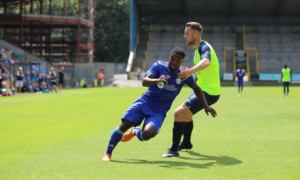 It was the home side who got us underway at the MBI Shay Stadium, with the West Yorkshire sun highlighting the new pitch.
A number of trialists where looking to make a good impression upon manager and make ways into his first choice selection.
New signings Mekhi Mcleod, Jordan Preston and Shaun Rowley where making their respective debuts for The Shaymen with all three having a mixed first half.
The game kicked off at 12pm with Halifax attacking from right to left facing the challenge of National League North side Stockport County who couldn’t go unnoticed in their luminous green number. 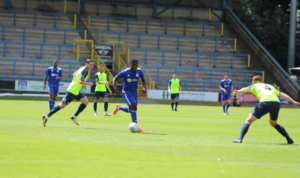 The half began in favour of Town with new signing Mekhi Mcleod impressing down the right wing with him consistently getting the better of County’s left back Scott Duxbury. The winger created the majority of chances for Halifax with an early deflected cross finding the feet of an offside Jordan Preston.
Another effort went close in the first half this time from Matty Kosylo who fired wide past the left post as Town looked to open the scoring.
However, it was the away team who opened the scoring for the afternoon with Stockport County captain Paul Turnbull firing a fierce shot past Shaun Rowley in Town’s after the ball was cleared from the previous corner. 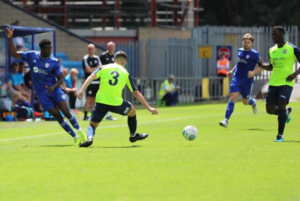 Halifax then tried to respond as best they could soon after the restart with a number of free kicks being won inside the county half.
Although this wasn’t to be the case as Stockport doubled their lead in the 38th minute with Frank Mulhern’s effort looping of Shaun Rowley.
After another uninspiring seven minutes past the half time whistle blew and it was time for Fullarton to give his team talk
A new look Halifax Team begin the second half with Jamie Fullarton making numerous changes during the break. Two players from the first half remained in the team with nine changes being made from the starting lining.
Crowd favourite Sam Johnson made his first appearance of the new season along with more trialists and players such as new signings Sanmi Odelusi and Josh Staunton making their debut. 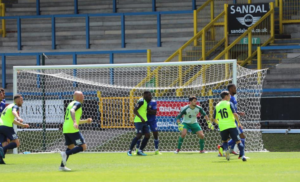 However, this didn’t bring much of a change from the performance with Odelusi and substitute Southwell linking well throughout the half to offer some excitement to the spectators.
A number of throw ins and free kicks hindered the flow of the second half with neither team offering much in terms of going forward.
Although in the final ten minutes Halifax mounted somewhat of a comeback and began to play good football with the front three of Odelusi, Tomlinson and Southwell linking well.
The one thing town fans could cheer about came in the 90th minute with Niall Maher rising above everyone else in the County box to head home from close range.
No sooner than this did the final whistle sound and the two teams shook hands before disappearing down the tunnel.
There was a few positives to be taken for Jamie Fullarton from today’s game, but in all it was a disappointing day at the office.

FC Halifax Town  @FCHTOnline
@twywuksjs Details will be announced at 8pm tonight by both clubs. Thanks
reply retweet favorite

FC Halifax Town  @FCHTOnline
⚽️🏆 GOOD LUCK |To @khfcofficial in the third round of the FA Cup.Thank you for your hospitality today 🙏… https://t.co/BUh9qFGwu5
reply retweet favorite

FC Halifax Town  @FCHTOnline
⏰ FULL TIME |The Shaymen are out of the 2021/22 Emirates FA Cup after goals from Amari Morgan-Smith and Ashley He… https://t.co/x9vrpFPhGz
reply retweet favorite

FC Halifax Town  @FCHTOnline
⏰ 90 + 2' |Woods takes a free-kick 30 yards out for Town, which goes into the box and works its way to Simpson in… https://t.co/RyGUY1AK9y
reply retweet favorite

FC Halifax Town  @FCHTOnline
⏰ 88' |Not long left here, as a crowd of 4,296 watches on - with 890 travelling Shaymen, thank you for your suppo… https://t.co/BIbpSeeNcZ
reply retweet favorite

FC Halifax Town  @FCHTOnline
⏰ 85' |The referee has stopped the game due to a crowd problem with objects being thrown onto the field.🔴 2-0 ⚪… https://t.co/tX1fPh6xo7
reply retweet favorite
Load More
Our
Principal
Partners