Following FC Halifax Town’s 3-1 win over Southend United, Manager Pete Wild spoke to Shaymen TV to give his thoughts on the game.

“I’m really pleased,” Wild said. “I think they came thinking they could bully us like Yeovil tried to do last week. I thought we really dominated them today. We were professional in the way we headed the ball, the way we tackled, and how we kept the back door shut. We also scored some really good goals. I think that the goals we got today were the best goals we have scored so far this season.” 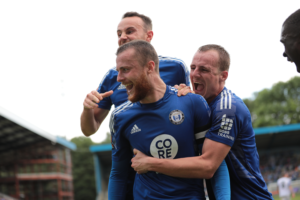 Jordan Slew opened the scoring in the 39th minute before Billy Waters netted his fourth of the season in the 47th minute to double the Shaymen’s lead.

“We’ve scored goals at the important times,” Wild told Shaymen TV. “Just before and just after half time are really good times to score. That has certainly helped us today. Young Billy has popped up again. It was a really good cross by Jordan as well so I was really pleased with both of them today.”

Niall Maher killed the game with a well taken header in the 73rd minute to make it 3-0. However, Southend netted a consolation goal in the 88th minute to prevent Town from keeping a clean sheet.

“We’ve worked on that set-piece,” Wild said. “We’ve worked on trying to free up that near-post space, and Niall is really good at getting across to the near post and he did that well today. The less said about their goal the better though.”

Town travel to Hertfordshire on Tuesday to face Boreham Wood. Wild is looking forward to the game and is hopeful of keeping the momentum going.

“It’s a tough week but a great week,” Wild told Shaymen TV. “I’m really looking forward to it though. We’ve got Boreham Wood who are flying. We will go and try and express ourselves which is all we are bothered about on Tuesday night.”