FC Halifax Town have confirmed the signing of midfielder James Berrett ahead of this afternoon’s away match at Boreham Wood.

Berrett, 29 has signed for his home town club after being released by Grimsby Town in the summer where he played alongside Nathan Clarke.

He started his career coming through the Academy at local neighbours Huddersfield Town making 35 league appearances for the Terriers. 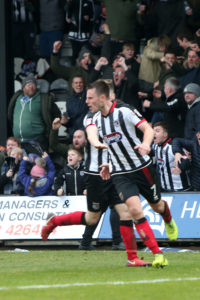 A move to Cumbria followed and he joined Carlisle United making 170 league appearances in a four year spell before signing for Yeovil Town in 2014.

He has represented the Republic of Ireland at U18, U19 and U21 level.

Town boss Jamie Fullarton told the official website, “I am delighted to have secured the signature of James. He has a wealth of experience playing in the Football League, he also compliments the group with his strengths he has as as footballer and is the type of person and character that will easilyt fit into the group and embrace what we are trying to do at the Football Club.

We wish James well during his time with the Club.

FC Halifax Town  @FCHTOnline
⏰ 90' |Immediate chance for Fidel O'Rourke as he is played through on goal but he can't find the back of the net.… https://t.co/W63KHGZzFK
reply retweet favorite

FC Halifax Town  @FCHTOnline
⏰ 78' | AttendanceA big thankyou to the 565 Town fans who have made the trip to Oldham and have made all the nois… https://t.co/njIB5RpHQj
reply retweet favorite

FC Halifax Town  @FCHTOnline
⏰ 72' |Max Wright picks the ball up from range before trying his luck at goal but it goes over the bar.🦉 0-1 🟡#Shaymen | ES
reply retweet favorite

FC Halifax Town  @FCHTOnline
⏰ 68’ | GOALMani’s penalty is saved by Norman but the ball falls right to the Town man and he stabs the ball home… https://t.co/bJRG4G31lE
reply retweet favorite