Jamie Wins Manager Of The Month

FC Halifax have looked a different proposition since Jamie Fullarton took the reins back in February. The club looked destined for relegation.

Fast forward to August and, having survived the drop, they’re now full-time and top of the Vanarama National League.

Wins over Gateshead, Dagenham and Redbridge, Maidstone, Barrow and Braintree catapulted the Shaymen to the summit.

During pre-season, Fullarton promised attacking football and plenty of goals to go along with it and that’s exactly what his side have delivered.

August saw Fullarton guide his team to five wins, score 12 goals and make their home ground a fortress – with a 100% record, conceding only once at the MBI Shay.

There’s no doubting that this season’s National League looks to be one of the most competitive in recent years. But you wouldn’t back against Fullarton and FC Halifax Town based on their current showing. 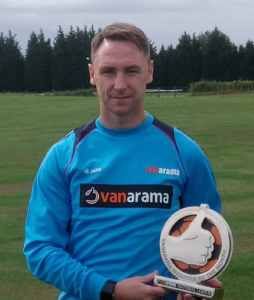 It’s been a superb start for Wrexham this season. At the end of the opening month of the campaign, the side were second in the league with only one defeat to their name.

Akil Wright has played every minute of the Red Dragons’ season so far and although someone who isn’t too accustomed to the headlines, he’s proving to be a crucial cog in the midfield for Sam Ricketts’ men if they are to have a successful campaign.

Ruled out with injury in his first spell with the club, he’s back permanently in Wales and is already a fan favourite at the Racecourse Ground due to his hard-working attitude.

After rounding off August with a man-of-the-match performance against Bromley, the 22-year-old is more than deserving of the award.

Jeff Hall of Chesterfield has won August’s Volunteer of the Month for the Vanarama National League.

Jeff has been a long-standing volunteer at the club for many years, most notably on the Spire Lotto where he spends several days each week visiting homes and businesses to collect weekly subscriptions.

On match days, he meets and greets the club’s hospitality guests and makes sure they are welcomed and know where they need to go.

Even if things aren’t going well, Jeff remains positive and is a well-known and popular figure, not only at the club but in the town too where fans will often stop him for a chat about the team’s fortunes. His love for Chesterfield shines through at all times.