FC Halifax Town will face Ebbsfleet United in their second of a hat-trick of home games at the MBi Shay Stadium tonight, 7.45pm kick-off

Town will be looking to capitalise on great 2019 home form to get one over play-off hopefuls Ebbsfleet.

This is a rearranged fixture from the 9th of the month. Last time the two teams met Halifax suffered their worst loss of the season away at Stonebridge Road. The reverse fixture finished 4-0 to The Reds which would take them above Halifax in the table. A Michael Cheek double a Chris Bush free kick and Danny Kedwell Penalty gave the hosts the win on the day against a much-changed Town team.

Town come into the game in brilliant home form having not been beat at the Shay in the league since before Christmas. Town also enter the game full of confidence after a brilliant 2-0 victory over high flying Solihull Moors. That win for Halifax saw them hit the crucial 50 points mark which for many signifies league safety and now the chance for Town to start games feeling more comfortable.

Meanwhile Ebbsfleet will also be feeling confident after three consecutive league wins has seen them move within three points of the playoffs, meaning if results went their way on Tuesday night the club could move up into the playoff places with only six games left to play.

Ebbsfleet have talent all over the pitch but the danger will come from their two top goal scorer’s Michael Cheek and Danny Kidwell who sit on 13 and 12 goals respectively. Both of whom scored against Town last time out.

Meanwhile Town will look to both scorers at the weekend to lead the line with Duku and Rodney, who have scored five of Town’s last seven goals. 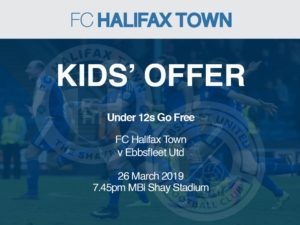