FC Halifax Town have been promoted back to the Vanarama National League after a 2-1 victory AET over Chorley FC.

The Shaymen entered the grudge match on a high after their emphatic penalty shoot-out victory against Salford the previous weekend.

Entering the game with a full strength side, manager Billy Heath opted with striker Richard Peniket after two goals over the two legs against Salford City in the semi-finals. 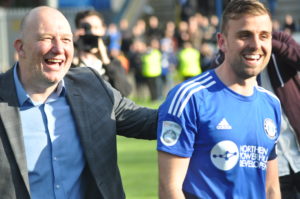 Coming off the back of a surprise victory over form-side Kidderminster Harriers, Chorley made just one change as Jack Sampson replaced Jason Walker in the starting line-up.

On loan from Macclesfield Town, Sampson missed the second leg of Chorley’s promotion semi-final victory through suspension – fittingly, Sampson’s first slice of action was a talking to from referee Daniel Middleton after a late challenge on Josh Wilde.

With very little action coming at either end, Wilde was to feel the damage of that tackle fifteen minutes later when the ever-present left-back was replaced by Denton as Town reverted to a back three. 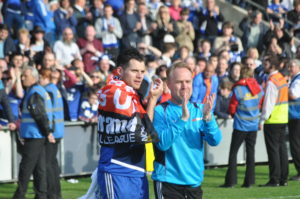 Chorley’s main man Marcus Carver was the first to enter the book, though, following a collision with Jordan Sinnott as he took a long throw into the box.

During a cagey opening third, it took Town over thirty minutes to record a clear chance on goal – the chance came after the substitute Denton knocked a corner down for Scott Garner to toe poke straight at Ritchie Branagan.

Just minutes before the half-time break, David Lynch unleashed a strike from the edge of the box after some hard work from loanee Dion Charles, narrowly beating the cross bar and into the North Stand.

And in a flurry of action during what proved to be a rather resolute first half, winger Matty Kosylo, operating behind the two strikers, entered the book for a foul on Adam Blakeman.

A scrappy bit of play at the back between Matty Brown and Sam Johnson saw Town play their way throughout the thirds before Sinnott slipped through Kevin Roberts.

The captain got the better side of his man Blakeman and slipped his shot under Branagan, sending the packed out South Stand into rapturous celebrations.

Kosylo was handed a golden opportunity to double Town’s lead when Sinnott led yet another breakaway. With Charles to the right of him and Kosylo on the left, Sinnott slipped through the winger who shanked his shot wide.

Chorley isn’t a team who back down from a challenge, and when Blakeman stepped up to take their first direct free-kick of the game he didn’t disappoint.

Halifax goalkeeper Johnson was well beaten as the strike whipped into his far side, nestling into the bottom corner.

Defender Cliff Moyo introduced himself in controversial fashion as he got away with just a booking following an off the ball incident with striker Carver.

It was then Denton’s turn to evade an early bath as he received only a yellow for a blatant elbow on centre-back Scott Leather.

Chances were still few and far between, and with Chorley finishing the stronger, Town will have been happy to enter extra-time unscathed.

Once again, neither side was exactly pulling punches but it was the man of the match Scott Garner who popped up with a looping header at the near post to hand Halifax the advantage.

A prolonged period of very little success ensued, with Halifax soaking up Chorley’s pressure it was the goalkeeper Branagan who had the Town fans biting their nails.

The ‘keeper was to get forward and attack a Chorley corner which fell to him in the air. The former Republic of Ireland u21 man attempted a bicycle kick which he hit over. 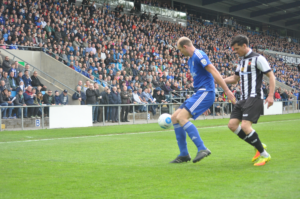 We would like to give special mention to our outstanding supporters, who came to the MBi Shay in their droves to watch Town return to the Vanarama National League.

previous Chorley: The Game Is Massive
next We’re In It Together!