They say that football is a funny old game but judging by the score predictions from the usual suspects, you’ve got to wonder just how much fun we really expected on our 80-mile journey to Wales. Having watched Wrexham win comfortably at Guiseley the previous Saturday, it’s fair to say the car’s roll-over jackpot looked there for the taking, 3-0, 4-0 and 5-0. Surely, they’d be a winner this week? 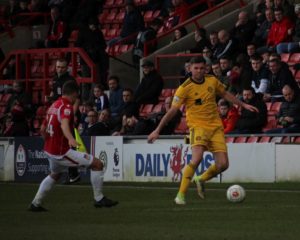 There’s a real feeling of a grand day out as you approach Wrexham; the tall old-fashioned floodlights of the Racecourse ground dominate the skyline each with 30 giant bulbs, the main road runs right past the back of the modern stand, and when parked on nearby streets you can almost see inside through the corners of the ground. The old stands are imposing with a supporter’s bar and a well-stocked club shop and ticket office.

A full price match day admission fee of £20 allows the travelling fans to sit in the right hand upper corner of the old main stand with boisterous home fans nearby behind the goal. The rest of the old main stand is occupied by the more conservative home fans but can generate some noise under the same roof. The 3500-capacity modern stand runs the full length of the opposite side of the ground with the name of the team spelt out in big letters across the seats. The derelict and decaying old main Kop terrace sits abandoned behind the far goal with a single giant club crest flag resting on the old red crash barriers. 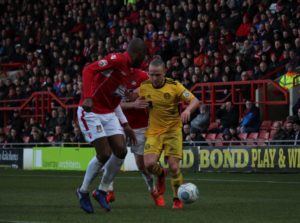 It’s always the case in an away trip that the Greetland and Ripponden Shaymen will reminisce about the good old days, days when goals were celebrated with a simple handshake and players would finish their pints of beer before taking to the pitch for their warm up at five to three. It was good to see at Wrexham that the match officials adopted a new pre-match warm up too. Instead of running and stretching around the pitch, each linesman was running the line, pretending to have a flag, carefully imagining players straying offside and practicing how they would raise their flag during the game. Seems odd to watch but perhaps it’s the future, just needs the ref to practice getting his cards out and blowing his whistle and we’re all sorted! 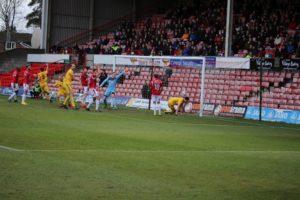 The first half started as we’d expected, loads of noisy support for the Shaymen as Wrexham dominated, playing the ball well down both sides of the pitch before scoring mid-way through the first half. The home fans were happy, and predictions looked good. Just before half time a Denton header was prodded over the line by Garner, surely offside, (we always seem to get a goal disallowed at Wrexham…) but no, all that practicing by the linesman paid off. The home side weren’t happy at all, but we didn’t care. The 250-odd travelling Shaymen were having loads of fun.

The second half was only a minute old when the Tesco Pete announced 44 minutes to go, it was one of those backs to the wall games. The players were getting stuck in, fighting for every chance and whilst Wrexham had plenty of the ball, they had no end product. The referee had us all guessing late in the game too, a well disguised sending off for the home side, lucky for us Tesco Pete was able to count the Wrexham players left on the pitch, on the third attempt he finally counted only 9 outfield players left.  With 6 minutes of additional time it seemed like Wrexham were given every opportunity to maintain their top sport and claim a winner. What a cheer at full time, a great away point. 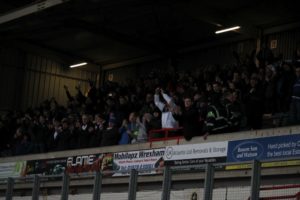 Driving back and were soon checking the other scores and tables; it had been another good away day for the Shaymen.  The predictions jackpot has rolled over once again but nobody cared.

Next up we’re off on another epic journey, an early start on the road Eastleigh, we never seem to get a win down there but who knows, it’s a funny old game….

previous Wrexham: Show's The Quality We Have
next Vanarama National League Preview