Where Are They Now: Matty Pearson

Former player Matty Pearson just made it int the 100 club at FC Halifax Town, earning 101 appearances in his short two years at the club. Pearson joined Town as we first got promoted to the fifth tier of English football in 2013. Here we will look at the career of the former defender.

Born in Keighley, Pearson was picked up by Blackburn Rovers as a 10-year-old. With eight years at what was a Premier League academy under his belt, Pearson was released when Rovers were relegated from the top-flight in 2012. 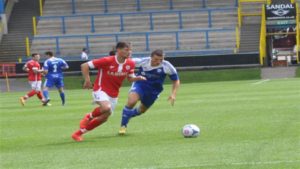 Following his release Pearson was signed by League Two side Rochdale on a one-year contract. Pearson was immediately put into the starting 11, unfortunately over the coming month or so Pearson lost his place in the team and wouldn’t get it back. Pearson would only make nine appearances in his one season with The Dale.

Before leaving Rochdale, Pearson joined Town on an end of season loan in March 2013. Pearson became an instant regular in the side bringing a solid dependable presence at the back in the run-in for play-off positions.
The Shaymen were promoted up to the Conference Premier and Pearson was signed a two-year contract in June 2013.
Pearson along with his fellow Shaymen kept their good form going and became the surprise package of the division, finishing inside the play-offs at the first attempt at that level since the reformation. Pearson earned himself a couple of call-ups for the England C team as a result of his performances for The Shaymen over the season.

In his final season at the club Pearson was as always one of the first names on the team sheet racking up 42 appearances in the season. Few of which were in an FA Cup which ended up at The Shay in the first-round against Bradford City with over 8,000 fans in attendance. Town solidified themselves in the league finishing ninth. With the Shaymen performing so well teams became interested in the players and Pearson was one. At the end of the season League Two side Accrington Stanley offered him a one-year contract and Pearson left Town on a free transfer. 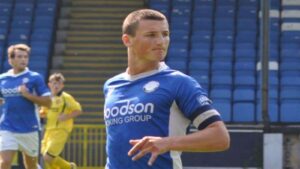 Pearson made an immediate impact at Stanley; he was in the starting line-up every week and was offered a new contract halfway through the season. Pearson became a fan favourite at Stanley, the fans christened him Mr. Angry whenever he was on the pitch.
In his second season Pearson would show his leadership credentials and at the age of 23 was given the occasional opportunity to captain Accrington. This again raised his profile in the Football League and Championship side Barnsley came in and bought Pearson for a reported £500,000.

Pearson’s time at Barnsley was not as smooth as he would have wanted. He stayed at The Tykes for just one season before moving on. Pearson initially started the first few games of the season but, injuries and a side struggling to fight off relegation. Pearson couldn’t hold down a regular spot and would sometimes have to play at left-back.

Barnsley were relegated to League One. Pearson joined one of the newcomers to the league Luton Town. The Hatters made easy work of League One as they were crowned league Champions at the first attempt. Pearson playing a pivotal role in the back line as the defender started every league game.
Pearson has another two years at The Hatters and will be in no doubt looking forward to giving The Championship another crack.