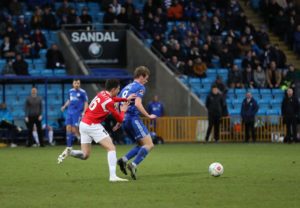 The match saw a gate attendance of 2,115 which is the third highest this season. Speaking to Shaymen TV post match King commented:

“The fans were brilliant, they kept us going especially when we had some tough spells in the second half when we was on the back foot.  A massive credit to them to keeping us on our toes through-out the game.”

King looked impressive thought-out the match and produced another Man of the Match performance as well as winning the online poll for best performance on our official social media Twitter.

“The morale of the team is brilliant, we just need to get the ball into the back of the net… we are creating the chances…we now have a little bit of a break and will be itching to go again.”

The Shaymen have a weekend break and will next travel to the Proact Stadium to face against John Sheridan’s Chesterfield FC who are unbeaten in six games and look to move out of the relegation zone.

“We could do with a little rest, we have a couple of days and we will come back ready to go so I am really looking forward to it.”

Subscribe to Shaymen TV for post match interviews and analysis and to view the full interview with Cameron King.