Following FC Halifax Town’s 1-1 draw against Notts County, Jamie Allen spoke to Shaymen TV to give his thoughts on the game, the chances created, the winning goal, and Torquay on Saturday. 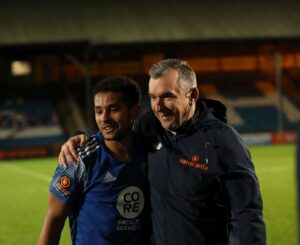 Following Elisha Sam’s 6th minute goal, Town looked the more likely to score, with Kieran Green even hitting the post. Allen was impressed with the sides persistence as things did not look to be going the team’s way.

“We’ve created plenty of chances,” Allen told Shaymen TV. “We’ve done that in most games so far this season. Obviously finishing those chances is something we are going to be working on in training. Credit to the lads as they kept going, even when the chances weren’t going in, they kept making chances and getting in those positions.”

Allen netted the equaliser deep into added time. Having gone through on goal, the forward managed to get it past keeper Sam Slocombe.

Town have another home game this Saturday and face Torquay United at the Shay. Allen is looking forward to the game and feels Town can feel confident going into the game.

“They are a very good side,” Allen told Shaymen TV. “They will come here, they no mugs, and give us a good game. We are going to work hard in training, prepare right, and make sure we are on it.”