A series recalling some of the club’s greatest-ever players 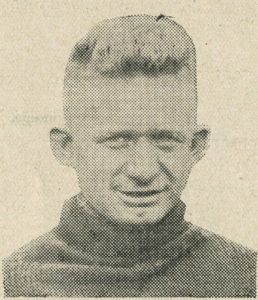 When Halifax Town sold top goalscorer Bill Chambers to Everton in July 1934, manager Alex Raisbeck swiftly moved to sign a replacement, snapping up Albert Valentine from non-league Macclesfield Town. Virtually unheard of when he first arrived, Valentine was soon the talk of the town, and after three seasons at The Shay, had left an indelible legacy, his thirty-three goal haul in the League in 1934-35 ultimately a record that was never to be broken by any Halifax Town player. Valentine had first sprung to prominence with Southport, joining as an amateur in September 1928 before turning professional the following January. He made a scoring debut in a 3-3 draw with Doncaster Rovers on New Year’s Day 1929 and four days later he netted the first of six first class hat-tricks in the 5-0 demolition of South Shields. His seventeen goals from just twenty-one League appearances that term led to several clubs ruling the roost over this young striker and in July 1929 he moved to Cardiff City, a club just relegated from the First Division. But failure to score in his first three games saw Valentine relegated to the reserves and by the time he joined Wigan Borough two years later his time at Ninian Park had yielded just sixteen League appearances and three goals. Valentine was then unfortunate to join his hometown club when he did. Wigan Borough were cash-strapped, and in October 1931, twelve games into their fixtures, the club was forced to resign from the Football League, though Valentine had the distinction of

playing and starting every game, scoring just the once in a 4-3 defeat at Crewe Alexandra on 12 September 1931. Joining Chester, Valentine struggled to make an impact and scored one goal from just two League outings, nor was he any more successful once he had moved to Crewe in August 1932. He made just five League appearances and scored two goals and was released after just one season with the club, though once he’d dropped into the Cheshire League with Macclesfield Town he found a new lease of life, going on to net an incredible eighty-three league and cup goals during the 1933-34 season. It was this kind of form which had Halifax Town boss Raisbeck believing Valentine was the natural successor to Chambers, and so he proved. Joining the club for a £500 fee in July 1934, Valentine netted on the opening day victory over Mansfield Town, and went on to score even more prolifically than his predecessor. On 9 March 1935 he equalled Chambers’ feat of scoring a nap hand in the 6-2 victory over New Brighton and surpassed Chambers’ haul of thirty League goals by scoring twice in a 4-0 home success over Gateshead on 6 April 1935, with his header from a Fred Tunstall cross being his 31st of the season. Two more goals meant he finished with thirty-three League goals as Halifax Town finished runners-up to Doncaster Rovers, and the goal he scored in a West Riding Senior Cup match took his tally for the season to thirty-four. Of course, Valentine, a dashing and brave leader of the line, was part of arguably the greatest Halifax Town team, which included the likes of not only the aforementioned Tunstall but also Tom Barkas, Arthur Mercer and Charlie Davies, and with such players around him, it was no surprise that there was little let up in the goals the following term. Valentine scored thirty in 1935-36 and was top scorer again in his third and final term in 1936-37, the highlight of that season coming when he bagged all four goals in the victory over Rotherham United on 27 March 1937.

There was understandable dismay among the supporters when Raisbeck’s successor Jimmy Thomson allowed Valentine to leave The Shay at the end of that campaign, and for the player himself, a £250 move to Stockport County was just as disappointing. Valentine failed to break into the side and within four months had been signed by Accrington Stanley as a possible replacement for the recently departed Bob Mortimer. But Valentine netted just once from seven League appearances and found himself in the reserves. However, he did manage nineteen goals in the Lancashire Combination and three in the Combination Cup, one of which was the only goal of the final against Clitheroe on 4 May 1938. In August 1938 he tried to resurrect his career at Oldham Athletic but was afforded just two senior outings, scoring one goal, despite a prolific scoring rate with the reserves, where he netted 28 goals from 29 appearances in the Lancashire Combination. Valentine remained with the club upon the outbreak of war, making three wartime appearances and scoring two goals over two seasons but retired from full-time football in 1941. He returned to play for Ince St Mary’s where his career had begun whilst employed as a wagon builder at the Ince Waggon & Ironworks Company.

FC Halifax Town  @FCHTOnline
⚽👕YOUTH TEAM OPEN EVENING |Are you in the U16/17 age range and want to play football? Then join us for our open e… https://t.co/oWFrvoWM0S
reply retweet favorite

FC Halifax Town  @FCHTOnline
@AdrianT39639269 Yes it is pay on the turnstiles next Tuesday night for home fans. Thanks
reply retweet favorite

FC Halifax Town  @FCHTOnline
@davedawdle They weren't discount vouchers, they were given out to non season ticket holders to guarantee them the… https://t.co/FSgifushwf
reply retweet favorite

FC Halifax Town  @FCHTOnline
💙 LEADING THE CHARGE |They’ve given it their all so far, and now need YOU more than ever!1️⃣ WEEK TO GO until w… https://t.co/XhnZPbI6Hq
reply retweet favorite

FC Halifax Town  @FCHTOnline
@AdrianT39639269 @ChesterfieldFC Pay on the turnstiles for home fans on the night. Thanks
reply retweet favorite

FC Halifax Town  @FCHTOnline
⚽️🎫 MATCH INFO |Our play-off fixture against @ChesterfieldFC on 2️⃣4️⃣ May will be ticketed for AWAY FANS ONLYI… https://t.co/iIJWpG6OpA
reply retweet favorite

FC Halifax Town  @FCHTOnline
💙 LEADING THE CHARGE |WHET THE APPETITE 🤩It’s been a thrilling season so far, let’s reflect on some of those mo… https://t.co/lAOiIYco6H
reply retweet favorite