All at FC Halifax Town were saddened at shocked to learn of the death of Bobby Barr, a former player and youth coach with Halifax Town. He was just fifty-one-years-old. And though elder brother Billy enjoyed a more illustrious career, it is a fact that Bobby Barr made his League debut before he did when he came on as an injury-time substitute for Craig Farnaby in the 1-0 defeat at Division Four leaders Northampton Town in February 1987. Bobby Barr, a flame-haired central defender, had joined the club from school as a trainee in August 1986 when Mick Jones was in charge, and that season, along with brother Billy, was a member of Gerry Brooke’s Under 19s side which clinched the Northern Intermediate title, appearing in thirty-two of the 34-match programme, and scoring seven goals, four from the penalty spot. But despite his early first team appearance, Bobby was never destined to hold down a regular spot under Billy Ayre. 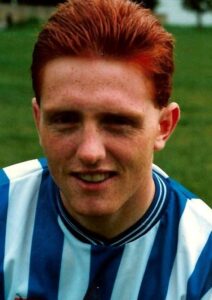 He made two appearances in the pre-season Yorkshire & Humberside Cup competition but didn’t feature again in the League until the visit of Carlisle United on 16 September 1988 following Ayre’s decision to suspend three regulars due to a breach of discipline. Bobby thus made his first Halifax Town start, playing his part in a memorable 3-3 draw, but he would only make three more appearances that term before being released. He went on to join HSF Loans League side Chorley and was part of their side which defeated Third Division Bury 2-1 in the first round of the FA Cup on 17 November 1990. Bobby later played for Bradford Park Avenue and became assistant to Trevor Storton, being instrumental in kick-starting the career of future international goalkeeper Paddy Kenny. Bobby then returned to The Shay in the capacity of youth team coach in July 2002 when Chris Wilder became manager, combining his role there with that as executive of Envirowaste, a local skip hire company. He later ran his own online media company. Bobby was well known in local footballing circles and was a regular attendee at The Shay.