A disallowed goal and an improved performance was not enough for the Shaymen to take all three points at the Furness Building Society.

FC Halifax Town reverted back to league duties after being knocked out of the Buildbase FA Trophy earlier in midweek.  Barrow AFC meanwhile were looking to bounce back from last weeks’ defeat at Havant & Waterlooville and continue their claim for a play off spot.

The game began vibrantly for the hosts as inside just 4 minutes former New York Red Bulls midfielder John Rooney fired his effort over the bar. 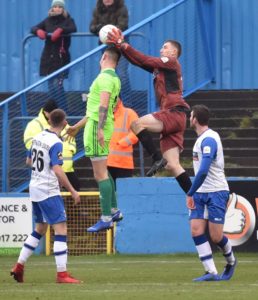 The Shaymen hit back and the most notable chance came from a powerful header courtesy of Scott Quigley which seemingly looked to lob the Joel Dixon.  Barrow’s goalkeeper was at full stretch to tip the ball over the bar.

As the game continued to pick up pace, Barrow continued from their vibrant start with some brilliant link up play by Rooney and former Swindon Town winger Jack Barthram which caused numerous issues for Shaymen left back Joe Skarz.

On the 20th minute mark the game was shrouded in controversy as a brilliant forward attacking run by Cameron King had put through Matthew Kosylo who chipped the ball past the Barrow goalkeeper into the back of the goal.  Referee Declan Bourne ruled Kosylo to be offside and therefore the goal was disallowed.

Nevertheless the West Yorkshire side continued applying pressure to their hosts’ defensive line.  New signing Quigley went close after turning away from his marker and beating the goalkeeper only to be denied by the post. 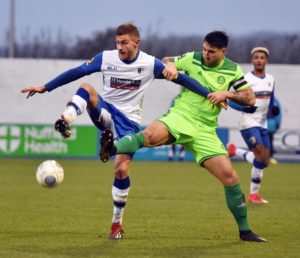 During the close phases of the first half the game became locked in an end to end battle.  Barrow also had their notable chances as Rooney played through striker Jacob Blyth who had found space inside the box but his short range effort was blocked by Halifax skipper Matty Brown.

As the first half was coming to a close former Huddersfield Town midfielder produced a well timed long ball which had met the feet of Scott Quigley, his effort was comfortably saved by Dixon.

The second half began slowly and certainly didn’t match the fast tempo of the first half.  Barrow AFC certainly had more possession but were lacking a decisive counter attack in the final third.

Town had a perfect chance early on in the half as Cameron King had beaten his marker on the Shaymen right flank, his resulting cross flew straight over Quigley’s head who was open for a free header. 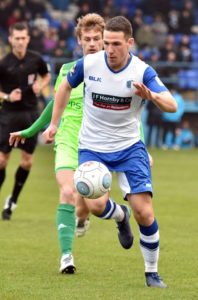 As the clock continued the ball found itself locked in a midfield battle as both teams were now searching for a breakthrough and push themselves into the lead.

On the 85th minute mark, substitute Jonathan Edwards managed to find space in the Barrow penalty area, his effort fizzled past the top left hand corner.

In added time Barrow AFC began to really test a rather resilient centre back pair in Nathan Clarke and Matty Brown who held firm and blocked numerous attacks from the Bluebirds. 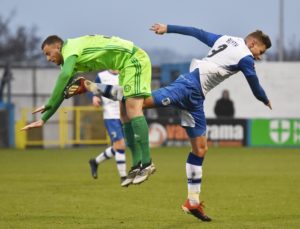 The referee brought the game to a halt with FC Halifax Town now gaining back to back clean sheets in the league.  The striking force and attacking intensity has certainly somewhat improved which will be useful against promotion contenders Salford City next week.

Barrow sit in 12th and are now 9 points from a play off spot.  FC Halifax are 17th with a game in hand over the majority of teams in the Vanarama National League.

Thank you to Barrow AFC for the photographs.