The last time the Shaymen and AFC Fylde met was at the near end of the last season, where Fylde came out on top with only a goal to separate the two sides. Since then the two teams have been promoted to the Vanarama National League and will face each other again this season. So, let’s get to know our upcoming opponents.

AFC Fylde are a professional football club based in Wesham in the Borough of Fylde that’s based in Lancashire. They were founded in 1988 as Kirkham and Wesham but in 2008 they merged with Kirkham Town and Wesham and adopted their current name. 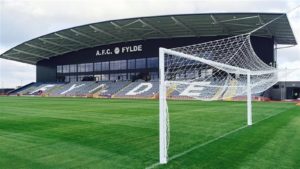 The team that’s known as the Coasters currently play at Mill Farm where they currently compete in the Vanarama National League – the fifth tier in English Football.

Dave Challinor sits in the managers chair. He is a former footballer that played in the football league as a professional central defender from 1994 to 2008, playing for clubs like Tranmere Rovers, Stockport County and Bury.

Challinor was announced as Fylde manager on the 2nd of November 2011 and guided the Coasters to the NPL First Division North championship in his first season. Fylde coasted to the Vanarama National League with the help of Challinor who has personally gone through four promotions in five seasons.

Since Challinor’s arrival. Fylde have won six trophies in numerous competitions such as the Lancashire FA Challenge Trophy, the Northern Premier League and the National League North title. They also set their biggest win when they put ten goals past Droylsden in October 2013 – another record set in Challinor’s reign. 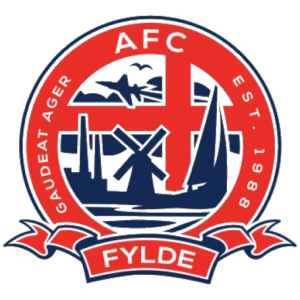 Fylde also have other club records such as their mammoth 9-2 victory over Boston United which had broken the record for the highest scoring game ever in the National League North. The Coasters also moved up to second in the list of biggest victories in the competition – a record coincidentally set by Boston themselves with a 9-0 victory over Redditch United during the 2010-11 season.

One of the Shaymen’s former transfer targets: Dan Bradley holds the club record signing when he signed a five-figure deal that will keep him at Mill Farm until 2019. Bradley and his team mate Danny Rowe scored 55 goals – over half of the team’s total goals tally last season!

Fylde striker Danny Rowe is one of the club’s record goal scorers. Rowe etched his name into the record books with a goal in the recent 2-0 victory over Hartlepool United. Since he transferred to Fylde from Lincoln, Rowe has scored 120 goals so far for the Coasters – that’s an average of 40 goals a season!

On 11th May 2008 the team travelled to Wembley Stadium to challenge Lowestoft Town in the final for the FA Vase. They returned victorious. On 12th May there was a victory procession through the town, with the team on an open-top bus, from Kirkham Market Square to Wesham Fire Station and back again, followed by a celebratory party in the Kirkham Community Centre car park. Thousands of spectators lined the route to cheer home the victorious team.

Finally, Fylde’s home town Wesham is served by its own free weekly newspaper, The Kirkham and Wesham Advertiser. The local newspapers are the two dailies, the Blackpool Gazette and Lancashire Evening Post, and the weekly Kirkham and Fylde Express.