Torquay United: Not The Best Performance

As debuts go, new FC Halifax Town loan signing George Waring almost had one to remember, as the Shaymen just missed out on ending their four-game winless run.

Waring, who has signed on a one-month loan deal from fellow Vanarama National League side Tranmere Rovers, scored deep into the second half to give Town the lead in what was a far from exciting game against strugglers Torquay United.

In the end, however, his goal was not to be the winner for the home side, as the Gulls’ Jamie Reid earned the Devonshire outfit a vital point following their disappointing start to the 2017/18 campaign. 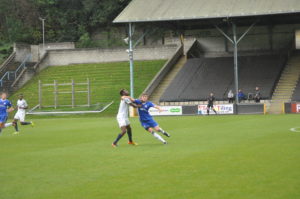 Despite it not being the desired result, Waring is just pleased to finally get back to playing again.

“I have had a lot of frustration over the past couple of months bit I have tried to keep my head down and wait for the right moment. Now it has come. It was nice. That is exactly what I wanted to do when I came in so I am glad I could do that”.

Going into the game, Town seemed like the favourites to gain the full three points when you compared the respective starts to the league. Town sitting in tenth, whilst Torquay found themselves propping up the table.

However, the Gulls did not play like a side who were said to be struggling, forcing a decent amount of pressure on Town’s back line in the lead up to the equaliser, something that Waring echoes.

“They played some good stuff at times. They are a big club and they’ve got some decent players. We were at home and we wanted to keep the three points, there is no arguing that. 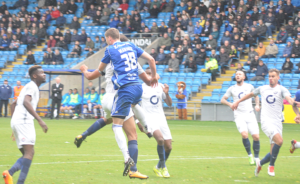 “That was our expectation before the game but, as I said, it could be a decent point if we get the right results over the coming weeks”.

At the end of the day, the result sees Town one point closer to the desired safety mark, a target that looks increasingly achievable after an overall impressive start to the new season.

It may not have been the best performance you will see from the Shaymen over the coming months, but Waring believes that the point could be an important one over the next few games.

“It is disappointing, really. We wanted to grind out a performance. It might have been a bit fortunate for us if we had taken all three, but I think a point was the fair result. When you get those opportunities, you want to see them out so it is disappointing.

“The lads said in the changing room afterwards that it was not the best performance they have put in so far this season. We could have been better in certain areas but, having said that, once we got in the lead we wanted to see it out and take all three points.

“It could be a good point going into the next few weeks”.

Head over to Shaymen TV to watch the interview with Waring, along with more post-match reaction from Billy Heath.