I guess if I had told them in advance, they wouldn’t have travelled. I thought there was probably no point in worrying the usual suspects anyway. Football is an unpredictable game and so are the complexities of car mechanics. In my defence I had asked the garage if the car was safe and reliable to drive and they had said yes. In all honesty, they probably thought I’d be driving to the local supermarket rather than just popping down the M1 to Maidenhead. I must admit I don’t know too much about cars but is a faulty fuel pump and dodgy battery a good enough reason not to travel?

The early morning drizzle had given way to the bright sunshine as we passed Sheffield on our long journey south. The big news of the morning was that Tesco Pete was the special guest contributor to the Maidenhead programme. Now I wouldn’t say he was over excited about it, but he read out each and every question and answer on the way down from his specially prepared notes. Each topic comment was analysed and if it’s ever possible to succinctly summarise his thoughts, he wasn’t sure if the Shaymen were going to win 3-0 or lose 3-0. Oh’ the joys of football. 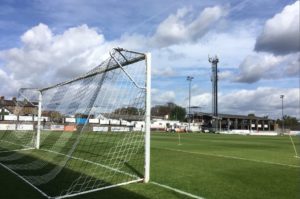 Following a hearty breakfast at our favourite Northamptonshire pit stop we were soon parking up in the local council car park just outside Maidenhead’s ground. The locals were extremely friendly too, a guy from another car was soon thrusting a part-used parking ticket at us, his intentions were great but with the ticket running out at 3:24 pm, we had to politely decline. It’s a bit of a lottery heading South these days; two weeks ago, it took us twice as long to travel just 42 miles further down the road to Sutton, it felt a tad early arriving at 1.00 pm but the turnstiles were open, and we headed into the ground.

There can’t be many clubs up and down the land where you bump into the Chairman on the way into the ground and can have an impromptu question and answer session. It’s fair to say the Greetland & Ripponden Shaymen asked Mr Bosomworth some tricky questions as we sat in the warm sunshine. In truth, it’s good to hear at first hand, the challenges and rewards of running a football club. It was also interesting to hear he was up to date with all the latest views of the fans too.

Maidenhead’s York Road ground is the oldest continuously used football ground in the world. It’s full of character and boasts a magnificent sloping pitch. It’s difficult to measure the gradient but there’s got to be at least 10 feet difference between the highest and lowest points of the playing surface between one end and the other. The most distinctive part of the ground are the letters of the team’s name, each painted in alternative black and white across corrugated iron walls behind one of the goals. It’s far more prominent than any flag you can buy. The main stand offers a comfortable elevated view across the pitch too.

It’s no exaggeration to say the Shaymen were lucky to only be 3 goals down at half time; we wouldn’t have grumbled if the score was twice as many at the break. It’s difficult to know what went wrong in the first 45 minutes but it was on a par with our disastrous trip to Grimsby a few years ago. Tesco Pete was optimistic though, with the bookies offering odds of 100/1 for an unlikely fight back, he was on it in a flash. 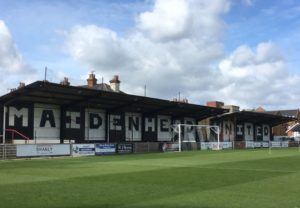 In contrast, the second half was far more competitive; the 100 or so travelling Shaymen gathered behind the goal at the bottom of the slope hoped for a miracle. There were a few chances of a consolation goal but to be fair, Maidenhead had opportunities to extend their lead too. It was perhaps just one of those afternoons where you have to say well done to the home side. In the first half they were all over us and fully deserved their 3-0 victory on the day. Perhaps if we had accepted the earlier offer of a parking ticket and left at 3:34 pm we would have been happier too?

Driving back and there wasn’t much to say about the result. We gave the referee a fair 7/10; he’d had a good afternoon. Jordon Preston was our Man of the Match too. As the dark descended the car’s Sat Nav reset its self in a sudden flash of glory, it was time to own up to the usual suspects about the week’s issues and concerns with the car. Once I confessed we were all relieved to make it back to West Yorkshire, the crowning glory being that we sneaked though an imminent closure of the M62 with moments to spare. It was like the most important thing in the day for a second, oh it made us smile!

Next up it’s the delights of a rare trip down south, this time we’re off to Bromley, I wonder if I should get the car fixed or try our luck again? C’mon Shaymen!