FC Halifax Town will be hoping a second successive upset is on the cards as they host Macclesfield Town in The Buildbase FA Trophy First Round Proper at the MBi Shay Stadium on Saturday, 3pm kick-off.

Billy Heath’s men came away from the EBB Stadium last weekend with all 3 points, after they were able to see out the game against Aldershot Town following Scott McManus’ opener.

The victory ended a wait of 11 long Vanarama National League games without a win for The Shaymen, and they will be hoping they will be able to build upon that performance against the league leaders at the MBi Shay Stadium on Saturday. 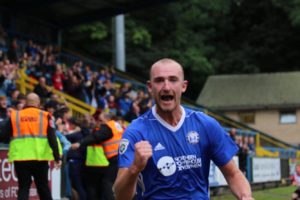 It is a game that will see the 2015/16 FA Trophy winners face last year’s runners up, after John Askey’s were beaten in the final at Wembley Stadium by York City.

The Silkmen will be on a high after smashing the typically solid Wrexham 4-1 in blizzardy conditions at the Moss Rose in their previous outing, which saw their unbeaten run stretched to 6.

Of those 6, they have accumulated 12 points out of a possible 18, form that has allowed them to build a 2-point cushion at the league summit.

One worry for the home fans will be the visitor’s form on the road. With 8 wins on their travels this season, Macclesfield boast the league’s best away record.

With 10 goals this season, Scott Wilson will provide the focal point of the Cheshire club’s attack. The 24-year-old heated up his frosty surroundings on Saturday when he bagged a hat trick in the demolition of Wrexham, and he will be coming into this mid-December encounter hot on form. 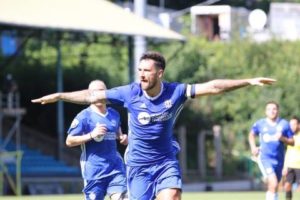 It will be up to the Town back four to show the resilience exhibited against Aldershot Town once again to keep the former Eastleigh man at bay.

Tom Denton will be available for selection again following his one-match suspension which saw him miss the match against The Shots.

The striker has found the back of the net on 7 occasions this year, with 2 coming in his last 4 outings.

Halifax have not been Askey’s favourite opposition over the years, failing to beat the West Yorkshire side in 6 attempts since taking the helm at Macclesfield, watching his team draw 4 times and lose twice.

The last game between these two finished 1-1 in front of the Shay faithful in April 2016, with the man who provided the win on Saturday giving the home side the lead, before Danny Rowe, now at Championship side Ipswich Town, equalised.

The league campaign of 2015/16 was perhaps one to forget for FC Halifax Town, but one bright point of that season came 3 months earlier when Shaun Tuton’s second half strike gave his side the win over the former Football League club. 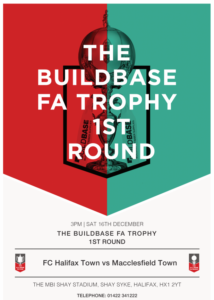 There will be live updates and commentary available on the club website and Shaymen TV.

previous Macclesfield Town: 10 Things
next The Bear Is Back