Everyone connected with FC Halifax Town – supporters, staff, current and former players – was shocked and deeply saddened when the news broke on Sunday of the death of former striker James Dean, everyone’s worst fears being realised after it had been reported that he had gone missing late on Wednesday evening. To all those who knew him, James ‘Deano’ Dean, though an aggressive type of centre-forward most teams would want, was a genuinely nice guy, described by one former team mate as a ‘gentle giant’. He certainly wasn’t on the pitch, and where FC Halifax Town was concerned, he was a throwback to the days of yore when centre-forwards were meant to put themselves about. The term ‘legendary’ often gets bandied about far too often, but certainly James Dean left his mark on the club and was the first to be afforded anything akin to cult status with the-then fledgling club. 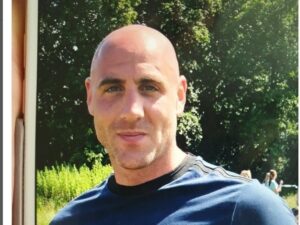 Deano’s route to The Shay had taken in various clubs, having started out with Great Harwood, a side close to Blackburn, where he was born on 15 May 1985. He then joined Chorley and was soon scoring goals and securing a four-figure fee move to Northwich Victoria in January 2007. His dream of making it as a professional footballer were realised when he was offered a deal by League Two side Bury, then manged by Chris Casper, and, indeed, he featured in the early months of the 2007-08 season. He made his debut in a League Cup tie against Carlisle United on 14 October 2007, and went on to make four League appearances before helping Bury to victory on his last appearance, a 3-1 success at Rochdale in the Football League Trophy. But he failed to register a goal for the club and was loaned out to both Altrincham and Stalybridge Celtic, eventually signing for the latter following his release from Bury. Dean’s time at Hyde, however, would be short, for just one month into the 2008-09 season, he was sought by Neil Aspin to spearhead his Harrogate Town side, and he soon became the scourge of opposing defences, helping the side to a ninth-place finish in the Conference North.

When Aspin answered the call to take over at FC Halifax Town in April 2009, he raided his old club for players he knew would deliver success, and thus Dean’s love affair with the Shay supporters began.

He opened his account by scoring twice in a 3-0 opening day success at Colwyn Bay and never looked back. In an unforgettable season, Dean was the fulcrum of a side which enjoyed championship success, and in a mightily exciting campaign, he delivered when it mattered. The Shaymen were playing catch-up with leaders Lancaster City for much of that season, and having turned around a 3-1 deficit in injury time to win at Garforth, they were hanging onto Lancaster’s coat-tails when they arrived at The Shay for what was, in effect, the title showdown. Dean’s performance that day was no better illustrated by a blogger who picked out Town’s centre-forward for special mention as the Shaymen crushed their rivals 4-0 to take leadership of the Unibond First Division. He claimed the visiting defence should have set themselves to be a resilient force, before adding, “But that would be to bet without Halifax’s number nine, a man by the not inconsiderable name of James Dean. Single-handedly, he bullied, bruised and baffled the Lancaster backline until he was pulled off as a mercy call by the Halifax bench. Everything that Emile Heskey doesn’t do as target-man, Dean did. He won, he held, he involved. Oh, and he scored. I don’t have the words, simply.”

It was possibly Dean’s finest hour in a Town shirt, but at that level, when on song, he was virtually unplayable, scoring goals through sheer brute force, powerful headers or rocket shots. He went on to score a total of forty goals in all competitions, by far the greatest haul in a single season by any player seen at The Shay, old club or new. 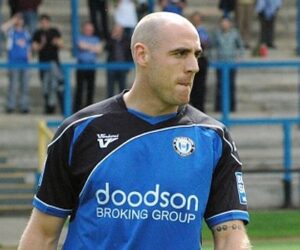 The following term, Dean formed a three-pronged attack with Jamie Vardy and Lee Gregory, one which must have been a frightening sight for any opposing defence, and not surprisingly did Aspin’s side canter to the Evostik Premier title, though Dean was unfortunate to miss the final months of that campaign through injury. Therefore, it goes without saying that his tally for the club would have been greater, and better still had he not received a senseless nine-match suspension for throwing the ball at a Guiseley player, then ‘manhandling’ the referee – he touched his arm – at the end of a pulsating 4-3 victory at Guiseley in September 2011. Dean battled his way back into the side but it was a season which ended in aggregate play-off defeat to Gainsborough Trinity, the second leg at The Shay proving to be his last in a Town shirt, and he left the club with the astonishing return of seventy goals from 128 appearances.

Dean continued to ply his trade with AFC Fylde before enjoying a three-year association with Chorley, which gave him the chance to pit his wits against FC Halifax Town when the clubs were paired with each other in the FA Cup in October 2014. The game at Victory Park ended goalless, but there was no happy return for the player when the sides reconvened for the replay at The Shay. Chorley lost 5-0 and Dean received his marching orders for a touch of over exuberance. He saw out his playing days with a succession of Lancashire and Cheshire based clubs, finishing his career with Bamber Bridge, whom he joined in October 2019.

James Dean touched lives beyond the footballing fraternity, but it was his disappearance on Wednesday night which led to many of his former FC Halifax Town colleagues, Neil Aspin and skipper Tom Baker among them, pleading with him to get in touch and indicating the high regard they had for him. Whatever Deano achieved in football and in life – he was also a kick-boxing champion – he left a lasting legacy and his place in FC Halifax Town folklore place is assured.

previous Return Of Fans
next Spectators 'Code of Conduct'