Goals from Tobi Sho-Silva and Josh Staunton gave FC Halifax Town a 2-0 win over Hartlepool United at The Shay on Tuesday evening, ensuring that the Shaymen stay top of the early Vanarama National League table.

Leading in the match, Town were put under intense pressure during the latter stages, but the visitors’ efforts were in vain as the Shaymen defence stood firm for its first clean sheet of the season.

Pete Wild named an unchanged line-up from last Saturday’s thriller at Ebbsfleet but an early injury to Danny Williams saw him make an early change with Jamie Allen taking his place. 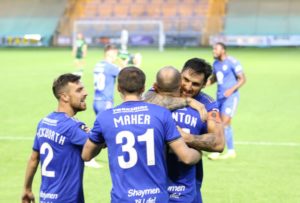 The Shaymen looked a little nervy in the first 20 minutes but grew into the game; a dangerous cross from Josh King found Staunton at the back post, who could not quite direct on target before another ball found Sho-Silva, who fired over from 10 yards.

Cameron King then found space on the edge of the box and fired just over as Town began to create chances, but Hartlepool were defending well.

A series of bad challenges from lead to three yellow cards for Peter Kioso, Romoney Critchlow-Noble and Jason Kennedy. Town continued to press on but as the first-half came to a close neither team managed to break the deadlock.

Both sides came out fighting in the second period but the Shaymen looked the better of the two sides. They won a series of corners but could not convert. 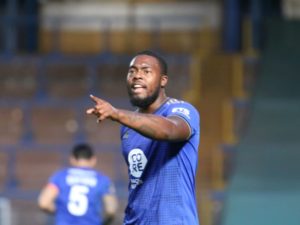 That was until the 54th minute when Staunton opened the scoring. Jeff King’s long-range ball found Allen who broke free and had his shot saved, with the rebound landing at the feet of Staunton who tapped home from five yards out.

After the home team took the lead Hartlepool stepped up the press and a dangerous cross was defended well by Town. Attack after attack went by for Hartlepool as they searched for the equaliser – once they hit the bar after a long-range effort took a deflection.

Pool’s Nicky Featherstone earned himself a yellow card for a lunging tackle, the result of an increased tempo in the match. Cameron King, after a strong showing, was replaced by Liam Noble for his home debut.

Town were not without their own periods of dominance, and it was not too long until they stretched their lead. 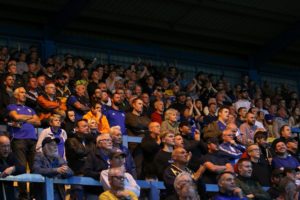 A corner was whipped in by Jeff King, finding the head of Matty Brown. His effort was saved by Ben Killip but landed at the feet of Sho-Silva who buried it home to double Town’s lead.

After that goal, it was clear that Hartlepool were rocked and a dive in the penalty box lead to handbags as Gime Toure’s dive was deemed simulation. A small brawl resulted, but no more bookings came.

With ten minutes to go Wild decided to bring on new signing Liam McAlinden, whose signing from Cheltenham Town was announced earlier I nthe day. He nearly made an impact, as a ball over the top saw him barge the centre backs apart but nothing quite came from the marauding run.

With five minutes added on Halifax closed the game out well to give Wild a first home win with the Shaymen.