Following FC Halifax Town’s narrow 2-1 defeat against Bromley, defender Nathan Clarke spoke to Shaymen TV to give his thoughts on the game.

“Obviously, we are all disappointed,” Clarke said. “We were coming in full of confidence off the back of the Chesterfield game. I thought we did well then and we were hoping to continue that today. We started ok, we did not create too much but we did have a fair amount of possession. It was a bit of a soft penalty really when the referee looks back at it. That gave them the advantage, and like a lot of teams in this division, when they do go ahead it is very hard to break them down. We certainly did not move the ball quick enough to create as many chances as we needed to break them down.”

Town found themselves 1-0 down after Michael Cheek skipped past a few defenders before being brought down in the box. The striker made no mistake to put the visitors ahead just 14 minutes into the game.

“Personally, I felt it was a soft penalty,” Clarke told Shaymen TV. “I think Summerfield and Williams both went for the ball and I thought they both got the ball and cleared the ball. It just looked like he had overrun it. When the ref looks back at it, it was quite soft. We have got to keep going after that. We need to keep our heads up and look forward. Games are coming quickly now and there is no time to dwell on it.”

The Shaymen pulled a goal back in the 93rd minute thanks to Neill Byrne, however by this point the game was already over after James Alabi had put the Ravens 2-0 up just three minutes earlier.

“It was too late,” Clarke said. “If the game was only just that little bit longer and if we had stretched them a bit more. The game was in front of them and up in the air to them and that is exactly what they want. They are a strong side and fair play to them, they have come here and defended well. They are on a good run themselves and we knew today was going to be tough.”

Halifax host Woking on Tuesday and the team is hoping to bounce back with a better performance and a much better result.

“We roll onto Tuesday now,” Clarke told Shaymen TV. “We will focus on that and practice what we could have done better. We need to move the ball quicker. We need to bounce back, that is the main aim. We want to create more chances. Today, certainly in the second half we restricted them to very few and created some good chances ourselves. But all focus is now on Tuesday and we are looking forward to it.” 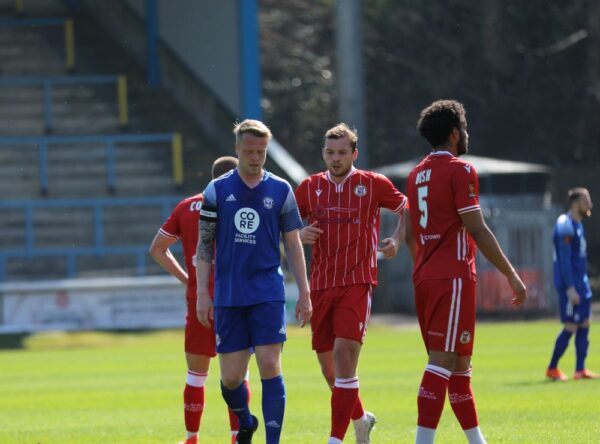