A gorgeous summer’s day; plenty of players getting game-time; six goals; a wonder goal; a nearly-wonder goal; a missed penalty; a mini-comeback from the underdog – who said pre-season games were boring? For a friendly, this game had just about everything you needed.

The action started in pulsating fashion, with Town winning a penalty after only two minutes after great play from Tom Denton. However, Liam King, who was made available for transfer in June, saw his low penalty saved by the excellent Harry Stead. 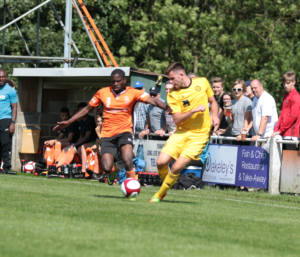 That was the start of an intriguing duel between the former Town skipper and the Brighouse stopper, who, despite ending up conceding three goals in the first half, produced some eye-catching saves throughout.

The Shaymen, however, didn’t have to wait long to eventually open the scoring. Connor Oliver, Town’s latest signing, attempted a 25-yard drive in the 15th minute, which fell kindly to Scott McManus who composed himself before firing high past Stead.

Four minutes later, Town created a great opportunity to double their lead. Oliver again was the provider, this time conjuring a great cross from the right, but fellow new recruit Bohan Dixon couldn’t find the target, as his cushioned side-footed effort – from within the six-yard box – crept agonisingly wide of the far post.

Another right-wing Oliver cross on 27 minutes was more fruitful – McManus grabbing his second of the game with a neat finish which gave Stead no chance.

With Josh Wilde playing at left-back – alongside a back-four including centre-halves Scott Garner, who was wearing the captain’s armband in Kevin Roberts’ absence due to an ankle problem, and former Wrexham player of the season Martin Riley and right-back Cliff Moyo – McManus was given a more advanced role down the left, much to Brighouse’s dismay. 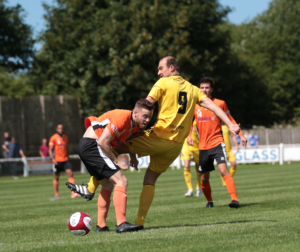 Stead frustrated King once again just after the half-hour mark, after getting a strong hand onto his vicious, rising shot. However, King was eventually allowed to celebrate in the 42nd minute. Dixon saw his shot brilliantly kept out by Stead but King was on hand to slot in the rebound.

There was still time for Stead to produce a phenomenal double save before half-time – firstly denying King’s curling effort from the edge of the box before jumping to his feet to save well from Josh Macdonald, from point-blank range.

Billy Heath made ten changes for the second half, with McManus moving to left-back. Further forward, Adam Morgan, who didn’t gain much game-time in the latter stages of last season, was proving to be a handful. Seeing the Brighouse goalkeeper off his line, he attempted a 30 yarder which was somehow tipped onto the bar. 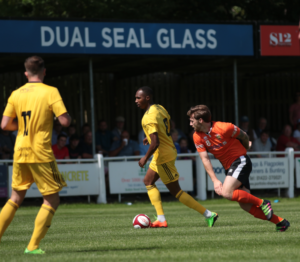 Town’s only trialist of the afternoon was then denied by another fine save before Morgan took centre stage again. From well within his own half, the former Liverpool starlet tried another ambitious effort – but this time, incredibly, it sailed over the Brighouse stopper and crashed in off the post. Pre-season or not, it was a truly astonishing goal.

Brighouse, however, rallied and netted two late goals but it wasn’t enough to deny Town an opening victory to their pre-season campaign.