August Manager And Player Of The Month

VANARAMA NATIONAL LEAGUE MANAGER OF THE MONTH
JOHN STILL – DAGENHAM & REDBRIDGE
The opening month of the new season has seen a number of contenders come to the fore.
Though it is early days the need to have a strong squad who appreciate the importance of not being defeated leads to a belief that they can lift the title come season end. This is a major factor to instil in team ethics and so John Still slightly edges above the others in the Vanarama National. Clinching the award was demonstrated ably with the emphatic defeat of Bromley 5 – 1, who themselves had just put six past Leyton Orient a few days before.
The bragging rights therefore in East London go to the Daggers manager, who at the close of the month sees his charges lie second in the table. 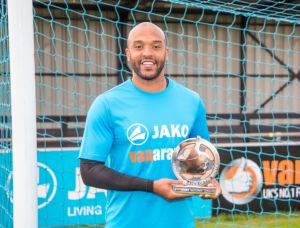 It is not unusual in the past for the monthly award to be picked up by a goalkeeper but this is usually attributable to saving goals and not scoring them.
But Nathan certainly hit the headlines this month when his goal scored for the Moors at Torquay United in the Vanarama National League went viral. Not only was it scored from his own penalty area but it was actually scored more unbelievably ‘up the hill’ at Plainmoor, which most would deem almost impossible.
Goal scoring keepers are not to be found easily in any level of the game, let alone Vanarama National League and so no one can really begrudge him picking up the accolade this past month. 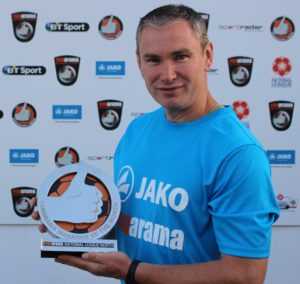 Likewise in the Vanarama National League North there were a number of contenders and it was very fine lines when it came down to deciding the monthly award. Ultimately a difficult choice and taking into consideration any aspects which could be and not belittling the achievements of Simon Weaver at Harrogate Town, the decision just fell to Kevin Wilkin.
Almost matching each other stride for stride with wins and goals it has probably been one of the hardest decisions ever to make since Vanarama became Title Sponsors and responsible for making these monthly awards.
Both clubs will no doubt be setting the pace for others to aspire to but on this occasion Kevin started this season where he finished off last season. That is also an important aspect to bear in mind. It is certainly not easy to do. And their start has aroused much interest in Northamptonshire. 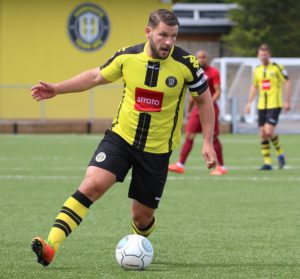 The question on everyone’s lips is when Simon Ainge is going to stop scoring goals. He is becoming a dab hand at finding the net and across the three National League divisions he has scored the most. Nine goals he has plundered which has helped his team at Harrogate Town finish the month in top spot in the Vanarama National League North, albeit on goal difference only, so those goals are of major importance.
During 2017, he has certainly brought a lot of attention not only to himself but his club with his scoring prowess. The Town have started with a strong determination to reach the Vanarama National League at the end of the season and Simon will be instrumental in keeping those beliefs alive in North Yorkshire.
Unfortunately, Simon Ainge was not able to receive his award due an injury picked up in the final match of August. We wish him a speedy recovery. 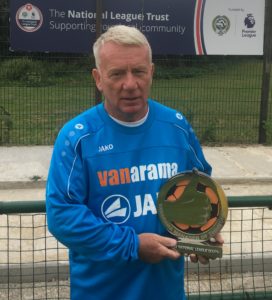 Another major debate took place over who should end the month with the award for the Manager of the Month in the Vanarama League South. Though occupying third place and with great starts by both Chelmsford City and St Albans City, East Thurrock United have remained unbeaten during the opening seven matches, the only club to do so and taken some impressive scalps in doing so.
In particular a win away at well fancied Dartford ended a super month for John Coventry and his players. Many thought they would struggle for fire power this season having lost leading marksman Tom Wraight to Maidstone United but they have still scored freely all over the pitch.
It is the first time the club have won such an award and can only boost their great start to the new season. 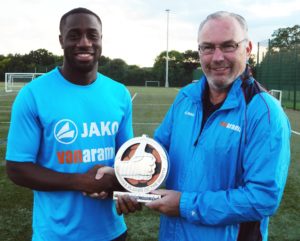 This time last season there were strong contenders from a number of strikers finding the back of the net at will but the award for August in the Vanarama South goes to a defender who has helped his club beat the other early season strong contenders Chelmsford City and in the process keeping a clean sheet in the top of the table early season encounter away in Essex.
22-year-old Harold Joseph (pictured left) only signed for St Albans at the start of the season from Enfield Town but he is already being touted for higher level status after some excellent performances for The Saints, in what is appearing to be a very competitive division already emerging in the Vanarama League South.
His form has been recognised as Player of the Month, though he will no doubt point to the tremendous help he has received from experienced players around him, which has benefitted him to settle so quickly in at Clarence Park.